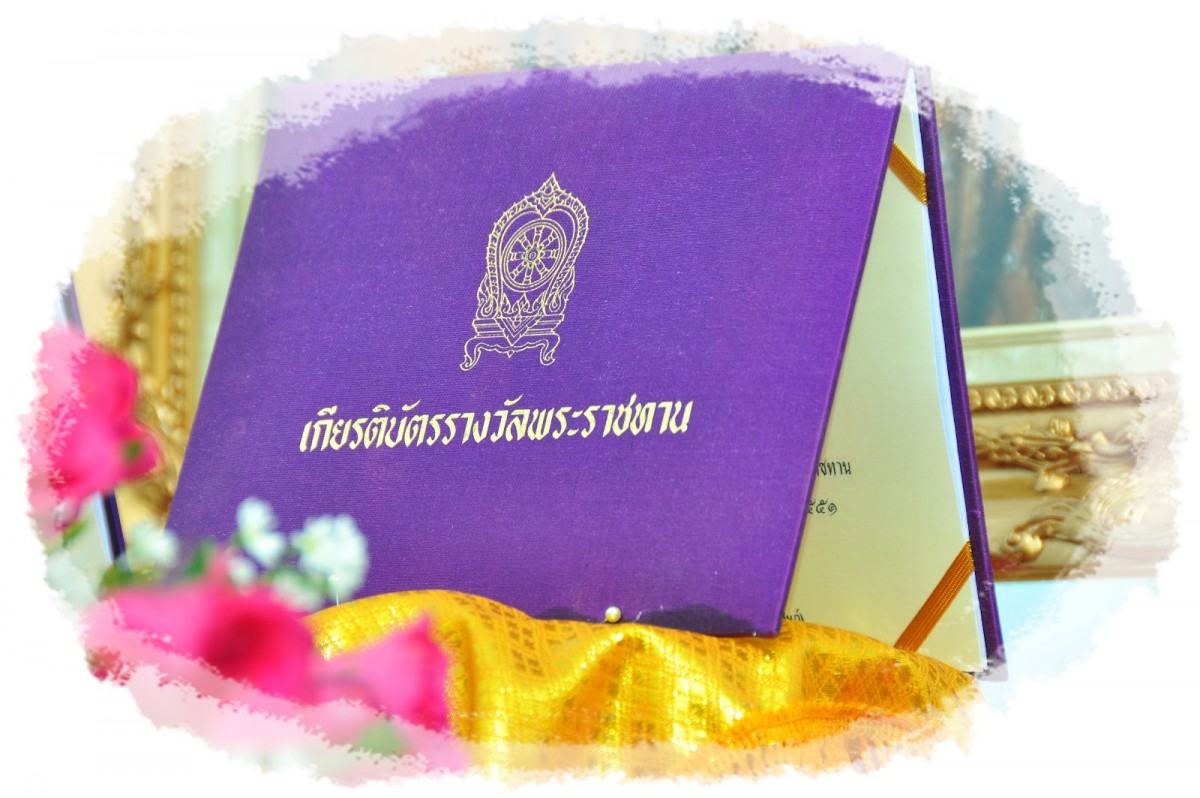 Today, we will introduce you all of three graduates who were conferred the Student Royal Awards for being the role model and inspiration to all students having the same dream of there of them.

Q: How do you know about Student Royal Awards

A: When I was a student, it was not so easy to get to the information as nowadays. I knew this award from the lecturers or staff in the Division of Student Affairs. We were shared some good advice because we worked closely together.

Q: What did you do to receive this award? What are the criteria of consideration?

A: As I remembered (long time ago since early in 2002), the criteria of consideration for the award were portfolio and interview. We needed to submit the portfolio presenting what we had been done. After that, the committee would interview us at the university which it was the competition in Student Royal Awards for Higher Education in the North. The portfolio at that time was like photos of activities that we gathered them all together as we were still using the film cameras. I, my friends and Mr. Peera Junoisuwan help them all get ordered and made them as a book for presentation. The most important thing for me was the contents what we would present. The contents of the story started from the beginning when I was a student here. I attended activities when I had free time during the study in the first year. I joined each activity which the university held. As a follower, I did not think that I would become a leader as the senior did. I just felt that we should pay attention and to the things that would happen by a group of people (team members of Student Affairs). We should consider those things were important and should not let them waste their time. I tried doing all of them such as, Badminton Club, Communication Radio, Peton. I went to the competitions. I sometimes won and I sometimes lost. It made me knowing more friends coming from other faculties. Some friends told me that I should try to be a candidate for the president of student club. That was the beginning of being the president of student club in 2001. My life changed a lot since that day. I broaden my experience until now.

“I myself never forgot and gave up in my goal which is the study. No matter what how many activities I attended, my grades must not be less. Sometimes I had to miss a class due to the activities, I had to speed up myself to read books and caught up what friends had studied. I had to do homework as normal as I was not the special one. I did not only study in classes, but I also studied outside the classes. For example, I took English courses after I finished the classes. In addition, I worked and served my internship during the study break (before the internship in the curriculum). I tried to do things which related to my profession, Accounting, so that I could study them and could understand them clearly. I never abandoned the study; therefore, I did both of the study and activities together at the same time. I could not stand if someone told me that I could not study properly because I joined the activities.”.

Overall, I did not do for the award. I did not create my profile to win this award. However, this award truly was “the award” for me because I did not expect for having it. It was the award that I received after I had done all of those things. During the journey, I had experience, new friends, learning new things, and learning how to live my life all along the way. I could not deny that this award was the award for my father, my mother, and my lecturers. They would not be disappointed with me who they had been teaching all the time. During the ceremony, it was clear that those people, my father, my mother, and my lecturers, were happier than me.

Q: Please Khun Orr suggest some advice to the next generation dreaming to win this award; and also, convey the messages to students having you as the role model of success.

A: First of all, I wanted to thank all of students who thought I was the role model of success. We would not fascinate a lot in the past of our success, and we also needed to continue developing ourselves.

Winning the award, I thought that the factors would not be the same when the time changed. The only thing that would not change is our intention to keep doing the good. When we do the good and useful to others, those things would reward us the same as the circle where we were one of the creators.

“I knew the Student Royal Awards since 2009 when I was studying at Tak Technical College. I had been receiving help and suggestion from Mr. Pongsak Boonphakdee all the time until I received the Student Royal Award in 2009. Dreaming of receiving the royal awards, the Ministry of Education and the Office of His Majesty’s Principal Private Secretary allowed us to bring a guest to the ceremony. My mother accompanied me at that time to meet with Her Royal Highness Princess Maha Chakri Sirindhorn at Dusidalai Hall, Chitralada Villa, Dusit Palace. I was very blissful and proud. It was not only the royal grace that I received the award, but I was also proud that I could take my mother to attend the ceremony being honour to our family. After receiving the Student Royal Awards in 2009, I went to study (with a quota on Ethical Behaviour) in 4-year programme in Electrical Engineering, Faculty of Engineering, Rajamagala University of Technology Lanna (Payap Campus) in Chiang Mai Province. In the first year, I thought I would stop doing all activities and would do only study. When a year passed, I asked myself that “The award and all the good I did would not have any values if we would not share to others.”. I had been thinking for several days, finally, I was back and started doing what I loved. I was a candidate for being the president of the student club, Rajamagala University of Technology Lanna (Payap Campus) in Chiang Mai Province in the academic year of 2012, and this was the beginning that I dedicated my time to work all the time I was studying here.

While I was in the position of student leader, I heard the lecturers and staff said that “The last time that our students conferred the award in Student Royal Awards was in 2002 (under the previous name as Technology and Vocational College, Payap Campus, Chiang Mai).”. Even though the students of the university were annually represented, there was no one awarded since then. This was a challenge to me. Many people would think it would be difficult to compete with students from other large size of the famous universities in the Northern region, and it would be more difficult to get the second opportunity to confer the award in Student Royal Awards. It is more difficult to keep doing the good than doing good. I did not think that much, but still worked for the public with the strong ideals following the policy “We must be the centre and the voice of students”. I served until the term of the position ended which was the fourth year. I had an opportunity to submit the project to be assessed for the award in Student Royal Awards again. At this time, the ceremony held at Chiang Mai University. I remembered all of my feelings at that time. It was very exciting and did not have much time for self-preparation. I met many students coming from other universities. They had their own outstanding national performance. The committee of the assessment team had approximate 15 people who were the experts from the Office of Higher Education Commission and the universities’ representatives. There was ten minutes for each presentation and twenty minutes for asking and answering questions. I remembered the questions which I was asked by the Chairman of the Committee. The question was “Why did you deserve to have this award?”. I answered that It was because I would not stop doing the good. I used to think of stop doing activities, but I was back to ask myself that my experience and award would be nothing if I would not think to share those things with others. If you want me to say the reason of receiving this award, it would be that my good thought of doing good and carrying on the activities as long as I was still alive. After answering the questions, my tears dropped. It was the answer that I gave them from the bottom of my heart to everyone reading in this section. In one life, there were not many things to remember, but we could choose what we wanted to remember whether it was a good one or not. For me, it was a good memory to study in Rajamagala University of Technology Lanna (The auspicious university of His Majesty)”.

Mr. Prompat Chotsiradanan (So Cool) a representative awarded in Royal Student Awards in 2015.

Mr.Prompat said though he was anomalies but he never felt neglected in destiny. He sought the ways out by create arts and skillful in drawing by using his mouth. He continued that when he was 3 years old he tried to draw a picture by using his mouth then he discovered that it was his gift and his parant always support him.

“ It was a great opportunity for me to study vitual arts at Faculty of Arts and Architechture, Rajamangala University of Technology Lanna. I love drewing. All teachers gave me more advance techniques. My classmates always help me in everythings. I am vey pround that  I participate in many drawing competitions and earn many awards. I have already proof that though I  am abnormality but I have same abilites to others”

Cool said that “This Royal Award is the highest honor award for me. I want to say thank you to everyone who support me both teachers, executives, all friends in my faculty and the most important thing is this university that gave me the opportunity to study and participate in university activities until I were considered to receive this award. Finally, I’ll maintain the virtue as the value ​​of the Students Royal Awards."

Reference : The path to be Student Royal Awards of Rajamagala University of Technology Lanna

RMUTL cooperated with Trade association of...
The project of Environmental Development of...
Latest News
Category