Team of Volleyball Club of the RMUTL Phitsanulok 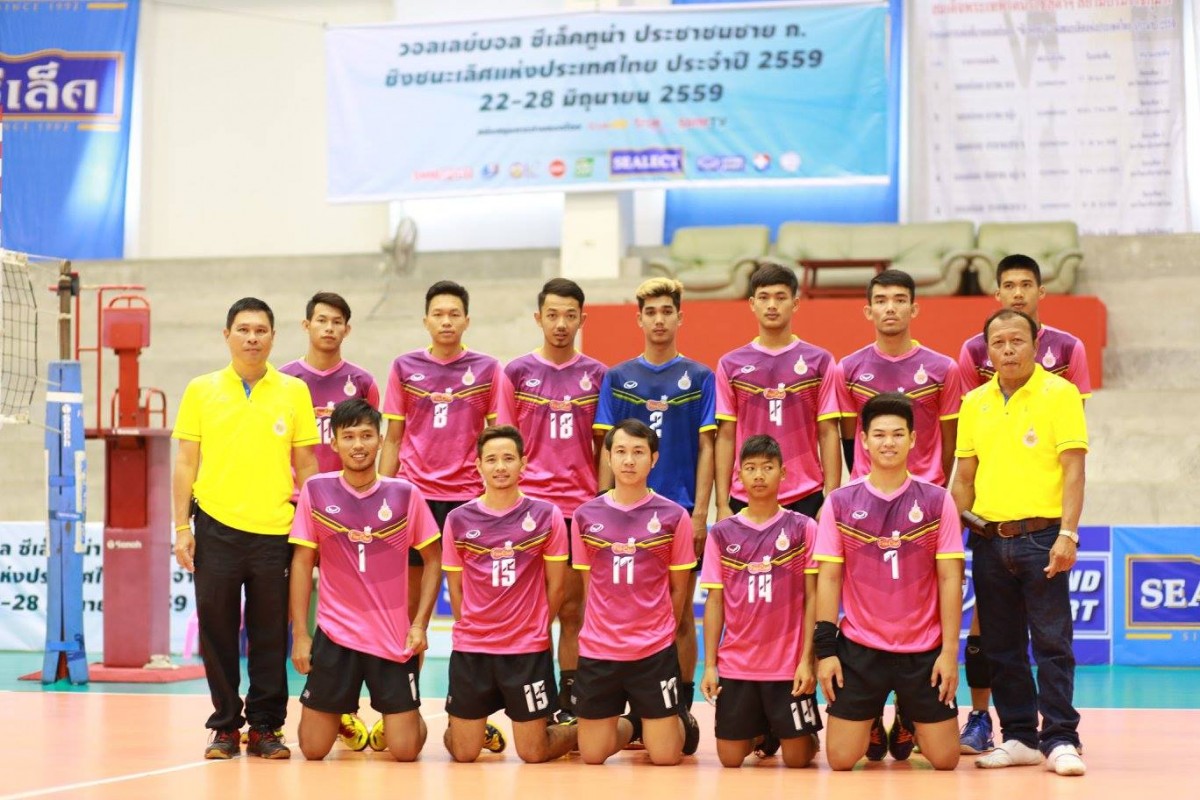 Volleyball is a kind of sports which is considered as one of the most popular sports. In the past ten years, the volleyball society had been continuously developed both in national level having ongoing competitions and Male Volleyball Thailand League. These were the professional volleyball leagues in highest rank of Thailand established in 2006 which were under the management of Thailand Volleyball Association and Thai Volleyball Company Limited. In present, there are eight teams attending the competitions. One of them is the team of Volleyball Club of the RMUTL  Phitsanulok. A part of the players were the students of the RMUTL Phitsanulok taking part in the first competition in 2014. In that year, they delivered an excellent performance and awarded the Volleyball Championship Thailand League which were the combination of talented students in sports and outstanding performance. They had an opportunity to join the main Thai national team to make the reputation for the university. Not only were the students of the team responsible for their study, but they also needed to manage the time to be professional athletes which they needed to do these two things at the same time.

We have so far had many athletes who graduated. In this issue, we will pursue the path of success in the Volleyball Club of the RMUTL Phitsanulok Province. It is the time to explore how the club formed and what is the future goal. The first one is the Team Manager, Associate Professor Decha Navanukroh.

Q: Can you tell me the beginning of the volleyball team of the Rajamangala University of Technology Lanna? How can this team be formed?

Q: What is the goal of forming this team?

A: “In present, some athletes graduated. The Rajamagala University of Technology in Phitsanulok Province and the club created new athletes to replace the ones graduated. The undergraduate students from the Sport School of Phitsanulok continue their study with us. The Rajamagala University of Technology in Phitsanulok Province is still in coordination with the volleyball club and to support the students to have an opportunity to continuously take part in several competitions. If the goals of the team have been asked, we wish the team to succeed in both sport competition and in their graduation. We want the team to be a role model of attempt and responsibility. If we have intended and tried to do our best to all responsibilities, the success is not too far to reach. Today, we have the senior athletes; for example, Nara and Natthaphol, who were graduated students. They are the role models showing that they did the best for their responsibilities. They also believed that the ones having strong intention to do something will succeed.”.

Q: Why did you form this volleyball team since the last four years?

A: “Previously, I was a volleyball player of the Rajamagala which it was called Sports of Technology and Vocational Education. I started playing with Pathum Thani Provincial Agriculture Office in the first and the second time. When I was assigned to the post in Phitsanulok Province, I became the trainer to the volleyball players here. I truly love playing volleyball. I think the Rajamagala University of Technology in Phitsanulok has potential in forming the team. Therefore, I intend to support this team to gain reputation and to be well known so that the team can support athletes who are looking for the place to study to be the students here. The athletes studying here will study and play sports together.”.

Q: The proud of the volleyball team

A: “I want to make students to have discipline by using sports as a medium. All athletes in the volleyball team must have discipline and high responsibility in their routine. In each day, they wake up at 5 a.m. to practice, and take a shower at 7 a.m. after that they will get dress and go to study. They will start practicing after the school from 5 p.m. to 8 p.m. They rarely have time for a break. I am so proud of them that they all have an opportunity to work in government agencies after they graduate, and have their own careers. Some of them have become sport players of the national team. They also make the reputation for the university and their families.”.

Q: In your opinion, what is the future of the team?

A: “I still intend to create students who love playing volleyball. Even though there are some issues such as, scholarship, the team supporter which the university has tried to provide the financial sources to the students for their future. I will try the best because the volleyball team is at least a dream for the talented students who have pay attention and attempt to do something. I believed that the success of practical graduates in the volleyball team will show that they are not only good at academic field, but they also have life experience gained from the competitions. Finally, they can adapt and apply in their future and be an important factor to develop country in the future.”.

Q: The support from the university is an important factor to form this team. How does the university support the Volleyball Club of the Rajamagala University of Technology Lanna in Phitsanulok Province?

A: “Assistant Professor Noppadol Trirat, Assistant Dean of the Rajamagala University of Lanna said that “The policy of the Volleyball Club of the Rajamagala University of Lanna in Phitsanulok Province has been continuously supported in the place for competition, the training place including the students who are the athletes of the club holding the competitions during the school term. The university supports the studying hours so that the athletes could finish their graduation in time and could fully spend their time on playing the sports. Today, we see that our students in the first badge who are the athletes has already graduated. This means the students could do both in studying and playing sports at the same time. The university supports students who are interested in joining the team. They can apply to study in the fields of their interests which the university will provide fully support to them.”.

Mr. Nara Chankaew, a newly graduated student, Major in Management, Faculty of Business Administration and Liberal Arts, the University of Rajamagala University of Lanna, was a former athlete of male volleyball in the national team in the Male Volleyball Competition in Asia for aged not over 23 years, the Universiade in 2014, and Championship in the 45th University Games of Thailand.

Q: What do you plan to do with the volleyball after you graduate in the future?

A: “After graduated, I pay attention more about the family business regarding the accommodation in Phetchabun Province. However, I have not yet abandoned playing volleyball.”.

Q: What experience do you gain while you are an athlete?

A: “Actually, we have to thank to being athletes because professional athlete makes us to have more discipline and responsibility. It is a very hard time when we need to study and be an athlete at the same time. We need to practice in every morning and evening, and need to go the study during the day. We have to attend every class and need to submit all assignments to the lecturers. It can be said that we are tired and feel it doubled when compared to our friends. My mother is worried and afraid that I could not study properly, but we proved that the result of our study was not bad. My mother gives me an opportunity to continue playing sports. Today, I am proud of our capability that I could succeed in everything I did. Many team members have already employed and obtained the military rank although they have not graduated yet, meaning that many of them have good opportunity from playing volleyball.”.

Q: What is the message that you would like to tell ones who have the same dream as you?

A: “I would like to share to everyone who has the same dream as mine that being an athlete and a student at the same time is not easy. You must have more responsibility than other peoples because an athlete is needed to be punctual, disciplined, and responsible. I believed that whoever you are – either an academic student or an activity student, and an athlete, you just need to fully pay attention and focus on your responsibilities. The capability of having responsibility and time management is important, and success is not far away from your dream.

Today, I am so proud that I graduated from this institute. I think that this place is a warm big family for life in university. I will apply a wide knowledge of my courses to my family business both in marketing plan in accommodation, work management, and living everyday life.”.

Amornthape Khonharn or June is a person who the Volleyball Club of the Rajamalaga University of Technology Lanna in Phitsanulok Province is very proud of him. He is an athlete in the national team who has a bright future and shows his talent in several competitions. He is currently studying in the Faculty of Business Administration and Liberal Arts, Majoring in Management, the Rajamagala University of Technology Lanna in Phitsanulok Province.

Q: How can you manage the time to study and to practice volleyball?

A: Both study and sport are the things that help people get developed to acquire knowledge and capability to achieve the goal of our future. Being a “good athlete” must strictly have discipline in time management. For example, you wake up at 5.30 a.m. to prepare yourself, and to practice sport between 6 a.m. and 7.30 a.m. After that, you will go to classes from 8.30 a.m. to 4 p.m. During the day, you will have to finish the assignments or projects assigned by the lecturers and do not procrastinate. We need to do practice again from 4.30 p.m. to 8 p.m. Lastly, we can have some rest for relaxing to be ready for the next day.

Q: June has succeeded in a step of being an athlete. What would you like to tell the junior athletes?

Educational management is the main mission of the university that need to be processed for creating qualified graduates to society. Sport is a part to support the educational management to be more effective. According to the speech of the King Rama IX “Sports do people, people do the nation”. This is because that sport is aimed to train people to be disciplined and to respect the rules of the society. Forming the Volleyball Club of the Rajamagala University of Technology Lanna in Phitsanulok Province has a clear objective to use the sports as a part of the learning activities outside the classes. The group of athletes could be represented as the role models of graduated students who are qualified and can adapt knowledge from the classes and experience from the competition field to develop the society and nation; and also, they can be good citizen and role models for the next generation of graduated students in the Rajamagala University of Technology Lanna.

Reference : Team of Volleyball Club of the RMUTL Phitsanulok

ASIA STAR Awards: A Stage for New Designer to the...
The Mae Pom A Rajagamala: A representative of...
Latest News
Category